This browser is not fully supported at this time. We recommend you use Chrome or Firefox browsers for which Foxwordy is optimized.

Foxwordy in the News

Read news coverage on Foxwordy in the press. If you are with the press and would like speak with someone from Foxwordy - please contact us. 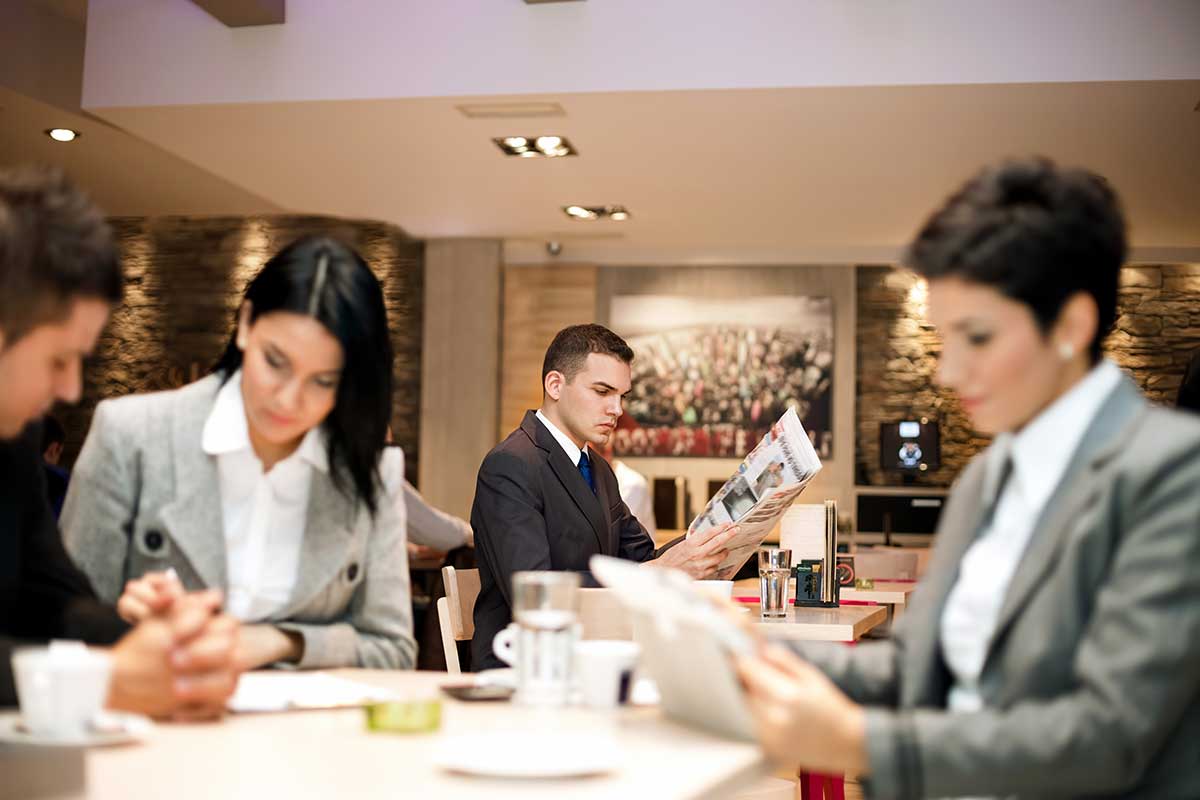 Only members of the press will receive a response

Foxwordy, the patented, AI-powered collaboration platform for the legal industry, and LegalBusinessWorld, the open, online platform focused on knowledge sharing of "the business of law," today announced the launch of their new content partnership.

Foxwordy, the private collaboration platform for lawyers, said it received two patents issued by the US Patent and Trademark Office related to its “inventions in enterprise social software, joining a list of several pending patents for the company.”

Above the Law has been covering technology for 10 years, when Skadden first allowed associates to buy iPhones and made "Skadden associates the coolest on the planet." Today, 77% of American adults own smartphones, and Above the Law is covering blockchain.

Why Collaboration in Law and Business Matters: A Conversation between Dr. Heidi Gardner, PhD and Foxwordy Founder, Monica Zent

Whether you’re a business executive or a lawyer in a law firm, an in-house counsel or a sole practitioner, you have probably wondered whether collaboration matters to your business and how it can help. Heidi Gardner initially explored these questions during her tenure at McKinsey & Co. She continued that exploration later in the course of obtaining a doctorate on the subject of group collaboration. In her research, spanning what is now a period of 20 years, Dr. Gardner found that teams that fully leverage their members’ talents earn higher margins, inspire greater client loyalty and attract and retain the best talent. Much of that research culminated in her recent book

Founder, Monica Zent, featured on the cover of LegalBusiness World’s Issue on Tech, Diversity and Law

Tech, Diversity and Law: Things Have Changed, but More Change is on the Horizon.

5 Things Legal Teams Can Do to Foster a More Collaborative Work Environment: an Interview with Monica Zent, Founder of Foxwordy

Today's blog is from a recent interview I conducted with Monica Zent, an experienced entrepreneur, investor, businesswoman, and trusted legal advisor to the world’s largest brands. Her most recent venture is as Founder & CEO of Foxwordy, the private collaboration network for lawyers. She is also the Founder of ZentLaw, one of the leading alternative law firms on the West Coast.

Foxwordy Founder, Monica Zent, Shares in the Live Conversation From The 2017 CLOC Institute

This week, legal professionals, consultants and tech companies from across the country will converge on the Bellagio Hotel in Las Vegas for what seems to have become one of the most important events of the year in the legal industry: the CLOC Institute.

Collaboration tool Foxwordy is looking to move further into the business space, and away from its roots as a "social media for lawyers". Startups don’t typically launch with their final product in tact. YouTube was originally conceived as a video dating site, Twitter began as a podcasting company, and Flickr got its start as an online role-playing game called Game Neverending. Tech companies often have to modify their strategy based on the way users interact with their products.

What lawyer wouldn’t want to earn higher margins, inspire greater client loyalty, attract and retain the best talent, and gain a competitive edge? According to Heidi Gardner, a former McKinsey consultant and Harvard Business School professor, now lecturing at Harvard Law School, the key to all these benefits is what she calls “Smart Collaboration.” Based on over a decade of research, her new book, “Smart Collaboration,” reveals these significant tangible benefits for lawyers, their firms or companies, and their clients.

The Power of Collaboration

How to Solve the Collaboration Conundrum

Browse through corporate literature today and you might conclude that our biggest threat isn't a recession or foreign trade. Instead it's silos, those internal units that frustrate and conquer us from within. In fact, some 42% of C-level executives rank overcoming silos as their top priority, according to a 2016 Experian survey.

Monica Zent, the dynamic founder of Foxwordy Inc., Zentlaw, and other ventures, knows that collaboration is key. When asked about her career philosophy, Zent quotes poet Mattie Stephanek, saying “Unity is strength… when there is teamwork and collaboration, wonderful things can be achieved.” Zent is on a lifelong mission to spread collaboration in the legal community.

The Secrets to "Smart Collaboration" for Lawyers

Monica Zent, CEO of Foxwordy, has partnered with the National Bar Association. “This partnership is special to me because it involves something I am personally passionate about: diversity in the law. We are delighted that Foxwordy is now a tool that can be used by all National Bar Members to help them advance in their careers and gain access to colleagues and opportunities to which they might not otherwise have had access,” she said.

Meet lawyer Monica Zent, CEO of Foxwordy Inc., public beta launch: Feb. 1, 2014. Based in Palo Alto, Calif., she’s determined to convince lawyers to embrace legal technology so they can take advantage of tools that can make their jobs much, much easier!

How Lawyers Can Harness The Power Of Social Media

Law360, New York (June 24, 2016, 10:50 AM EDT) -- In a recent interview, actor Jamie Foxx recalled how he used to do “social media” well before Facebook and Twitter. After a standup set, Foxx would ask fans to give their phone numbers, which he kept on index cards. When he was announcing a date, he would page those users.

An abundance of legal technologies have emerged in recent years, from document management and discovery tools sold to law firms, to regulatory compliance software sold to companies, to legal research tools attempting to make law accessible to individuals. Many of these legal technologies fundamentally reimagine the way law will be practiced in the future.

Get Social: Why the Legal Industry Needs to Embrace Social Networking

The U.S. workforce is undergoing vast changes. Companies are beginning to look at the workplace as an agile construction comprised of a combination of full-time and contract workers and lean outfits supplying services at a value.

Foxwordy Founder on the Future Practice of Law (Podcast)

I spoke with Monica Zent, the Founder and CEO of Foxwordy, a private social network for lawyers, and the founder of ZentLaw, an alternative law firm.

We discussed the genesis of Foxwordy, which she launched in the spring of 2015, how it differs from other social networks, the use case for a legal industry specific portal, and the future of law practice.

The New Competition - Emerging Legal Technologies Out of Silicon Valley

In January, the National Law Review had pleasure of attending the Annual Marketing Partner Forum in beautiful Rancho Palos Altos, California. Programing was provided by the Legal Executives Institute at Thomson Reuters and featured over 15 hours of dynamic workshops. Hundreds of marketing partners, managing partners, in-house counsel and senior-level marketing and business development professionals were in attendance.

Why the Future of New Business is Social Selling

If you thought social media was just about being social, think again. Today it’s about “social selling.”

Potential investors, employees, colleagues, clients and customers are literally at your fingertips. But it is up to you to build relationships and establish trust. And that is what social selling is all about.

7 strategies lawyers can use to overcome work pressure

The Great Recession of 2008 was seven years ago, but its effects continue to linger in the legal profession.

How Foxwordy Became a Top Social Network for Lawyers

On Ally McBeal, they did it in a unisex bathroom. On Law & Order, they often did it behind closed doors in wood-paneled offices with Manhattan views. Back in the day on LA Law they did it while walking to court. In real life, lawyers usually confer with their colleagues by grabbing a colleague, walking down the hall or maybe bumping into them at a trade event or bar association dinner.

Ways to Achieve a Positive State of Mind

As an entrepreneur, one of my most important keys to success is staying positive – especially when facing the inevitable obstacles of running a business.

Attention Lawyers: Now Is the Time to Get Social

It's not surprising that, for the most part, lawyers aren't very active on social media. But there's no reason for that.

Monica Zent, attorney and the Founder and CEO of Foxwordy and Founder of ZentLaw, gives us an update on her private social network, Foxwordy. Monica shares how to build a following on a social network and how to bring the followers back to the network once they join. Hear Monica talk about being a successful entrepreneur and the important advice she has for women in business.

The Best Business-Building Move I Ever Made

The Social Network Show on KDWN welcomes Monica Zent, attorney and the Founder and CEO of Foxwordy and Founder of ZentLaw.

Will You be My Friend?

The promise and pitfalls of lawyer-focused social networks.

Have a thorny problem you’d love to kick around with other lawyers but not so anxious to reveal your identity? Foxwordy is happy to be of service.

Promising to provide anonymous collaboration, the website claims to be the first private lawyer network.

Members of the social network Foxwordy aren't sharing memes or selfies. Instead, they're seeking opinions on family-law rulings and the legalese printed on sunscreen labels.

Known for their competitive spirits, legal professionals often have misconceptions about collaboration.

As Facebook, Twitter and other big Social Media Networks are expanding, there are quite a lot of niche social media networks on the rise. In my previous post, I had specified that a network for DJ’s had been released, DJ Social. Now, a new Social network has been released just for lawyers where lawyers can quickly get information from trusted colleagues, or have access to thousands of documents and clauses.

Foxwordy -- a Social Network Just for Lawyers (Who Are Invited)

Just last week we went over the benefits of starting your own LinkedIn Group, and you've just coined a clever name for your group and now, we have the audacity to tell you that you should do more. We hear you.

Yesterday, Bob Ambrogi reported on the emergence of yet another lawyer-focused social network, this one called Foxwordy, which touts an invitation-only membership and “access to thousands of docs and clauses authored by experts” as two of its unique features.

More and more companies, understanding the power of collaboration, have turned to starting their own internal, private social networks. It’s an attempt to simultaneously harness the power the social media has for instant, off-the-cuff communications while still maintaining privacy about what’s going on within the company.

Attention Lawyers: Now Is the Time to Get Social

It's not surprising that, for the most part, lawyers aren't very active on social media. But there's no reason for that. After all, each attorney has their own opinions and ideals that set them apart. And whether they're sole practitioners, hold an in-house position or work at a law firm, it's important for each to establish their own professional brand. Social media is the ideal way to let colleagues and potential clients or employers know exactly who you are and what you bring to the table.

14 Ways to Strengthen Your Professional Brand in 2014!

The new year is here and with it, a chance to have the best of your career. Whether you're self-employed or work for a small or large company, that will mean building and strengthening your professional brand. By enhancing your presence on social media, setting clear and attainable goals for yourself and managing your personal responsibilities, you'll pave the way to make 2014 a huge professional hit.

The Top 5 Essential Strategies For Entrepreneurs

Starting your own business means wearing tons of different hats and facing endless challenges. The entrepreneurial journey is filled with peaks and valleys. It can be difficult to stay motivated, remember your vision and stay on course, especially during tough economic times.